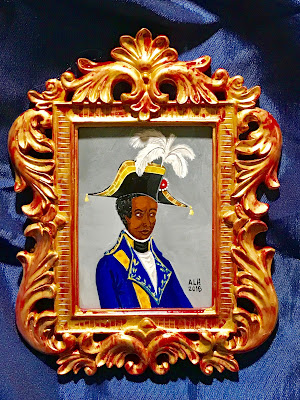 My latest miniature is titled "Toussaint L'Ouverture, the black Napoleon" Available PM me for price! Toussaint Louverture, Louverture also spelled L’Ouverture, original name (until c. 1793) François Dominique Toussaint, (born c. 1743, Bréda, near Cap-Français, Saint-Domingue [Haiti]—died April 7, 1803, Fort-de-Joux, France), leader of the Haitian independence movement during the French Revolution. He emancipated the slaves and negotiated for the French colony on Hispaniola, Saint-Domingue (later Haiti), to be governed, briefly, by black former slaves as a French protectorate.Toussaint was the son of an educated slave; Legally freed in 1776, he married and had two sons. Toussaint was homely, short, and small framed. He was a fervent Roman Catholic, opposed to Vodou (Voodoo). He dressed simply and was abstemious and a vegetarian. Although he slept little, his energy and capacity for work were astonishing. As a leader he inspired awe and adulation.