This Victorian advert for ‘cocaine toothache drops’ seems thoroughly shocking nowadays. The very idea of giving cocaine to children in any form, let alone in the form of a ‘cure’ seems horrific to those who know the addictive and destructive qualities of the drug. However, for the Victorians it was quite a different story. It does not take a lot of poking about in Victorian antique ephemera to come across a variety of quite legitimate posters advertising drugs, drug-taking paraphernalia, and even pharmaceutical bottles containing remnants of Class A substances sold over the counter. Far from the straight-laced and rigidly proper characters we now think of them as, the evidence seems clear: vast swathes of Victorian society were off their heads on drugs.

Cocaine has been used since at least 3,000 BC, in the form of chewed coca leaves. The indigenous people of the Peruvian Andes chewed the leaves in order to stimulate their cardiovascular systems and thus counteract the effects of the thin mountain air. Indeed, this practice still continues today – the Bolivian government recently petitioned the UN to allow its indigenous population to continue their traditional use of coca leaves. It was even used by Spanish conquistadors to render South American forced laborers more biddable. However, the active ingredient of coca leaves was not isolated and transformed into the form we now know as ‘cocaine’ until the Victorian era – whereupon it took off in a big way. Sigmund Freud was among the first to rave about its benefits. He published a paper entitled ‘Uber Coca’, in which he claimed cocaine to be a ‘magical’ drug which should be prescribed for a variety of conditions, including depression and impotence. He continued his advocacy of cocaine despite noticing that it led to physical, moral, and mental decline, and despite the shocking hallucinations many of his patients experienced while on the drug. In 1886, John Pemberton mixed up a recipe for a new soft drink containing coca leaves. ‘Coca-cola’ – so named for its cocaine content – is no longer a Class A substance, but back in Victorian times it became very popular very quickly due to its euphoric effects. Before long, cocaine was being added to a vast variety of things, ranging from tonics to toothache drops. Advertisements, bottles, cocaine pipes and more are commonly found by the collector of Victorian ephemera. More worryingly, cocaine was often mixed into deadly ‘elixirs’ containing those other Victorian ‘miracle’ drugs – opiates. 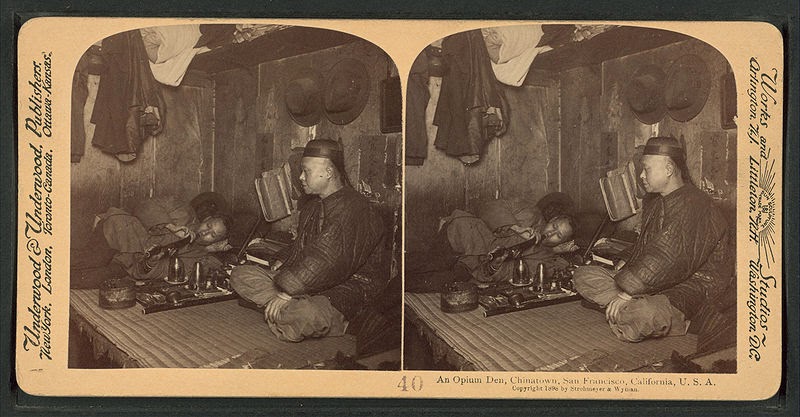 The Victorian opiate of choice was laudanum – a tincture of opium, which was considered a miraculous panacea and prescribed for everything from mild headaches to cancer. You didn’t have to have a prescription to get it, though. It could be freely bought over the counter, and no pharmacist worth their salt would be without laudanum in both liquid and pill form. Laudanum is largely responsible for the popular image of the interestingly pale Victorian lady wasting glamorously away within her boudoir. It promoted lethargy and loss of appetite, as well as rendering users more or less mentally incapable of doing anything other than lie around in a state of confused euphoria. Nurses even spoonfed laudanum to teething babies – resulting in numerous tragic infant deaths. Babies were not the only ones to die from laudanum overdose, however. Although the precise number of laudanum-related deaths remains unknown (it was often prescribed for terminal diseases, and early death simply attributed to said diseases), it is certain that many perished. The artist Elizabeth Siddal – wife of pre-Raphaelite painter, poet, and conspicuous addict Dante Gabriel Rossetti – was cripplingly addicted to laudanum, and died of an overdose, as did many other less high-profile Victorians. The problem was heightened when laudanum began to be supplemented with stronger opium. Smoked through pipes in ‘opium dens’, this Chinese drug swiftly began to take hold of Victorian society. Its effects were shocking, and began to alert the Victorians and early Edwardians to the fact that use of narcotics could have serious and widespread drawbacks. Late Victorian literature abounds with descriptions of heavy-lidded men recumbent in smoky opium dens, faces gaunt and chests hollow, their entire being given up to the drug upon which they have become dependent. It was a shock for those who had previously confined drug habits to the sickroom and private boudoir, and a very visible wake up call for governments and health authorities. Clearly, something had to be done. 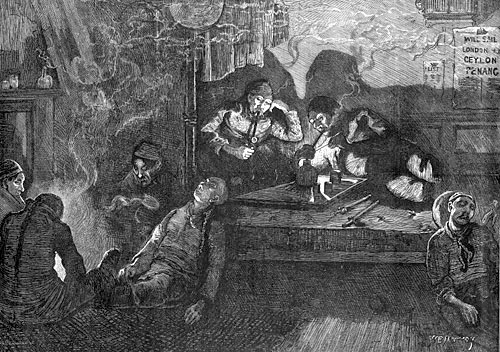 Opium smokers in the East End of London, 1874. From the Illustrated London News, 1 August 1874

Modern addicts have a plethora of treatment resources available to them. They can draw upon years of medical knowledge and experience in the field of substance withdrawal, and enjoy the benefits of psychiatric expertise into the addict’s state of mind. Psychological and physical problems can be dealt with, and extensive support networks exist for those who wish to utilise them. Our ancestors had no such luck. Addiction was seen as a moral flaw rather than a mental and physical problem, and doctors thus tried to cure it through such profoundly ineffective methods as stern punishment and prayer. Many addicts were confined to ‘inebriate asylums’, where they received inhumane ‘treatments’ such as being strapped down and sluiced with ice-cold water. Unsurprisingly, these had very little effect upon the problem. However, when the addict returned to their substance of choice after release, it was put down to entrenched moral degeneracy rather than to failure on the part of the treatment. It was only when the wealthy and influential began to seek surreptitious treatment for their addictions that substance abuse treatment became an area of serious scientific study. More humane ‘drying out’ houses for the rich were established, where they could go through medically supervised withdrawal. However, it was not until the 1960s that drug addiction treatments began to comprise more than just seeing an addict through the stages of withdrawal, and it is only very recently that some breakthroughs have been made in understanding the science of addiction.