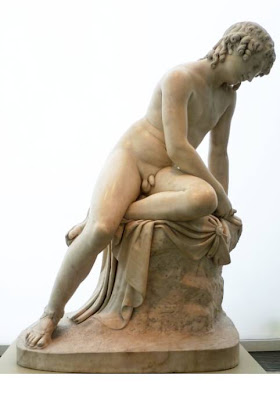 Narcissus, by John Gibson 1838
Gibson sculpted several versions of the Greek mythological figure Narcissus, the beautiful young man who fell in love with his own reflection. On a morning walk on the Monte Pinciano in Rome. the artist said that he was inspired by the sight of a boy at a fountain in Rome, 'looking into the water... The action was perfect for a statue of Narcissus'. He claimed he 'immediately went to his studio and modelled a small sketch in clay of the action which he had admired'. 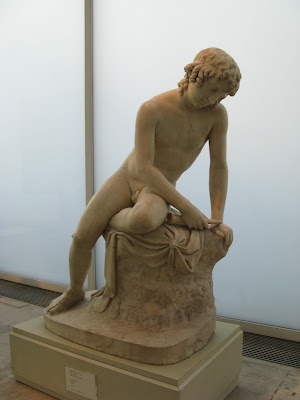 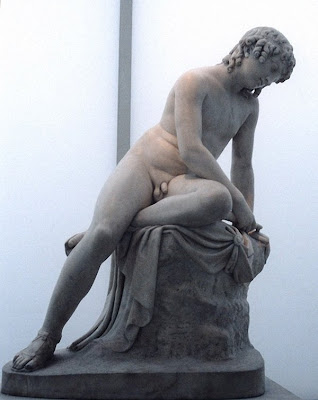 Narcissus, by John Gibson 1838
He came across a deep pool in a forest, from which he took a drink. As he did, he saw his reflection for the first time in his life and fell in love with the beautiful boy he was looking at, not realizing it was himself. Eventually, after pining away for a while, he realized that the image he saw in the pool was a reflection of himself. Realizing that he could not act upon this love, he tore at his dress and beat at his body, his life force draining out of him. As he died, the bodyless Echo came upon him and felt sorrow and pity. His soul was sent to "the darkest hell" and the narcissus flower grew where he died. It is said that Narcissus still keeps gazing on his image in the waters of the river Styx. 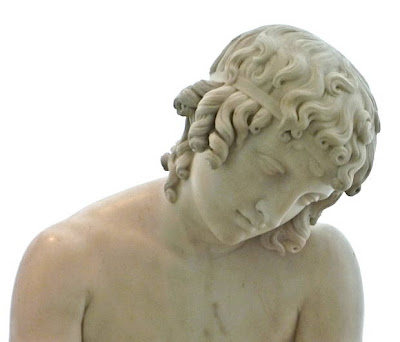 The Greek telling of the myth is a moral tale wherein the proud and unfeeling Narcissus is punished by the gods for spurning a male suitor. It is thought to have been intended as a cautionary tale addressed to prideful young men. 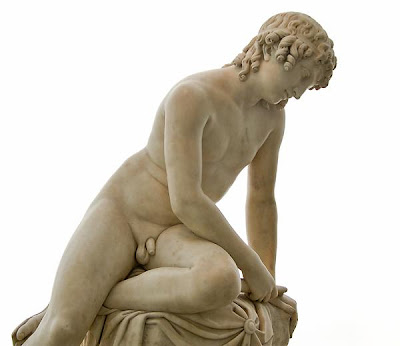