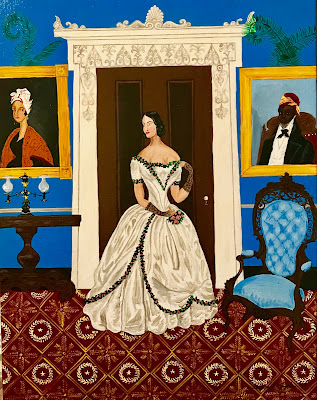 My latest Masterpiece is titled "Mary Ellen Pleasant visits Creole New Orleans" 11 x 14 Available. Mary Ellen Pleasant was a 19th-century African American entrepreneur widely known as Mistress Pleasant. Mistress Pleasant used her fortune to further the abolitionist movement. She worked on the Underground Railroad across many states and then helped bring it to California during the Gold Rush Era. She was a friend and financial supporter of John Brown, and was well known in abolitionist circles. After the Civil War, she took her battles to the courts in the 1860s and won several civil rights victories, one of which was cited and upheld in the 1980s and resulted in her being called “The Mother of Human Rights in California”.

Mary Ellen Pleasant lived for a short period in New Orleans during the early 1850's with her 2th husband John James ("J.J.") Pleasants who was a close relative of famouis New Orleans Voodoo Queen Marie Laveau’s husband. During this time it is believed that Mary Pleasant and Marie Leveau meet many times in Creole New Orleans. This painting shows Mary Pleasant in her rented New Orleans home in the 1830's Greek Revival style. She stands in front of a Greek Key style doorway in a lavishly furnished interior. To the left is a portrait of Voodoo Queen Marie Leveau and to the right a portrait of a black man by New Orleans Free man of color artist Julien Hudson. Under Marie Leveau's portrait is a 1840's mahogany card-table by J & J Meeks of New York city who had a retail showroon in New Orleans on Royal street. On the cardtable is a English Regency bronze and gilt Argand Lamp. To the right of Mary is a American Rococo Revival rosewood armchair.

Pleasant made contradictory claims about her earliest years, and her exact origin remains unclear. In one version of her memoirs dictated to her god-daughter Charlotte Downs, she claimed she was born a slave to a Voodoo priestess and John Hampden Pleasants, youngest son of Governor of Virginia James Pleasants. In any case, she showed up in Nantucket, Massachusetts circa 1827 as a 10- to 13-year-old bonded servant to a storekeeper, "Grandma" Hussey. She worked out her bondage, then became a family member and lifelong friend to Hussey's granddaughter Phoebe Hussey Gardner. The Husseys were deeply involved in the abolitionist movement, and Pleasant met many of the famous abolitionists. With the support of the Hussey/Gardners, she often passed as white. Pleasant married James Smith, a wealthy flour contractor and plantation owner who had freed his slaves and was also able to pass as white. She worked with Smith as a “slave stealer” on the Underground Railroad until his death about four years later. They transported slaves to northern states such as Ohio and even as far as Canada. Smith left instructions and money for her to continue the work after his death.

She began a partnership with John James ("J.J.") Pleasants circa 1848. Although no official records exist of their marriage, it was probably conducted by their friend Captain Gardner, Phoebe's husband, aboard his boat. They continued Smith’s work for a few more years, when increasing attention from slavers forced a move to New Orleans. J.J. Pleasants appears to have been a close relative of Marie Laveau’s husband, and there is some indication that Pleasant and Laveau met and consulted many times before Pleasant left New Orleans by boat for San Francisco in April 1852. J. J. had gone ahead and written back that the area seemed promising for the Underground Railroad.

When Mary Ellen arrived in San Francisco, she passed as white, using her first husband's name among the whites, and took jobs running exclusive men’s eating establishments, starting with the Case and Heiser. She met most of the founders of the city as she catered lavish meals, and she benefited from the tidbits of financial gossip and deals usually tossed around at the tables. She engaged a young clerk, Thomas Bell, at the Bank of California and they began to make money based on her tips and guidance. Thomas made money of his own, especially in quicksilver, and by 1875 they had amassed a 30 million dollar fortune (roughly 647 million dollars in 2017) between them. J.J., who had worked with Mary Ellen from the slave-stealing days to the civil rights court battles of the 1860s and '70s, died in 1877 of diabetes.