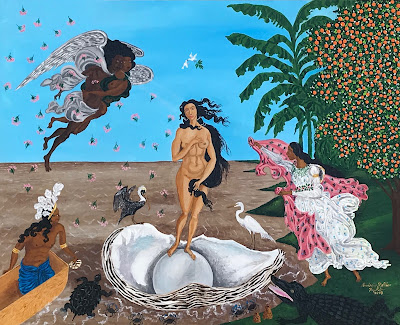 A true great Artist paints throughout the year but only creates a few true Masterpieces during that time. This is one of them. This is the first painting in a series and period I have entered called my "Creole Renaissance Period" I give to the world "The Birth of Creole Venus" 20 x 16, Available. My good French friend Pierre de Pontalba who saw the beginning stages of this painting said "This looks like a crossover of Botticelli, Dali and Hopkins" !

My painting depicts the goddess Creole Venus arriving at a Louisiana shore after her birth, when she had emerged from the Bayou fully-grown ,called Venus Anadyomene. In the center the newly-born goddess Creole Venus stands nude on a peal in a giant oyster shell. An Eastern Brown Pelican, the state bird of Louisiana spreads his wings after just landing on Creole Venus large oyster shell as well as a White Heron. at the base of the giant oyster shell Louisiana blue crab and a Alligator turtle come to greet Creole Venus. Mud crayfish's mound's can be seen by the alligator. At the left the wind god Zephyr blows at her, with the wind shown by lines radiating from his mouth. He is in the air, and carries a young female, "Aura", personification of a lighter breeze, who is also blowing, Creole Venus to the Louisiana shore. Both have wings.

Their joint efforts are blowing Creole Venus towards the shore, and blowing the hair and clothes of the other figures to the right. To the left a Louisiana Indian arrives to pay homage to Creole Venus by a cypress dugout pirogue. Above Creole Venus head two doves kiss with one holding sassafras leaves for making Creole gumbo filé. Oleander flowers from the gods are blown along with the two flying figures. At the right a female figure holds out a rich cloak or dress to cover Venus when she reaches the shore, as she is about to do. She is one of the three Horae or Hours, Greek minor goddesses of the seasons and of other divisions of time, and attendants of Venus. She stands on a Louisiana shore with orange trees and banana trees! A alligator open month is at her feet.