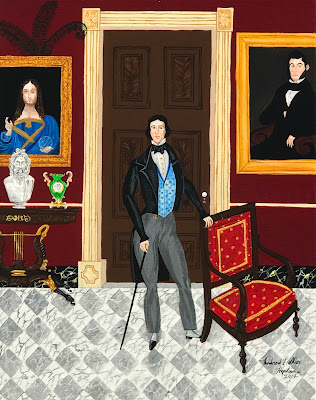 My latest Masterpiece and 3rd painting in the Aime family series, is titled "Gabriel Aime at Le Petit Versailles" 14 x 11, Available. This is a painting of Gabriel Aimé (1828-1854), youngest and the only son of Francois-Gabriel “Valcour” Aime the "Louis XIV of Louisiana." His mother was Josephine Roman Aime, sister of the governor of Louisiana. Gabriel Aime was born at "Le Petit Versailles", in St. James Parish on March 11, 1826. Gabriel Aime was educated at Jefferson College in Louisiana then he was sent abroad for further education in Europe.

During the 1840's and early 1850's Gabriel Aime tuck "Grand Tours" of Europe. The Grand Tour was the traditional trip of Europe undertaken by mainly upper class American young men of sufficient means and rank in the 19th century. On these tours Gabriel Aime would have trek through France and Italy in search of art, culture and the roots of Western civilization. With nearly unlimited funds, aristocratic connections and months (or years) to roam around. He would have commissioned copies of Old Master paintings like the one depicted in my painting of Salvator Mundi, a painting of Christ as Salvator Mundi (Latin for Savior of the World) original by Leonardo da Vinci, dated to c. 1500.

Ironically the original showed up at a New Orleans auction house in the 1990's. On Easter Sunday, Apr. 4, 1847, Gabriel Aime received a Papal Blessing from the Pope at the Vatican. Gabriel Aime would perfect his language skills and mingled with the upper crust of the Continent. Gabriel Aime sent to Le Petit Versailles many crates of furniture and decorative arts he had purchased on the Grand Tour like the marble bust of Zeus on the New York classical card table. In 1854 Gabriel returned from a tour of Europe and arrived in New Orleans during a yellow fever epidemic.

After traveling to his family home Le Petit Versailles, he became sick and died soon after being diagnosed with the Yellow fever.The Times-Picayune notice of his death described him As "His tall, well developed, manly form swelling with youthful health and vigor, and his easy, polished, courteous manner lending additional grace to his pleasant words and lively, smiling countenance". Gabriel’s passing marked the end of his father Aime’s sugar experimentation and the start of his withdrawal from society. The following is recorded in Aime’s plantation journal:

“The diary of Mr. Valcour Aime closes on the 18th September, 1854, on account of his retirement from active life. His journal was continued by Mr. F. Fortier, his son-in-law. …” In 1856 Aime’s wife Josephine passed away, followed by his daughter Felicie in 1859. The loss of his son, wife, and daughter crushed Aime. In his diary, he writes, “Let him who wishes continue. My time is finished.” Aime secluded himself at home and converted the garden grotto into a makeshift chapel. There and at the local parish church he spent his time in prayer.