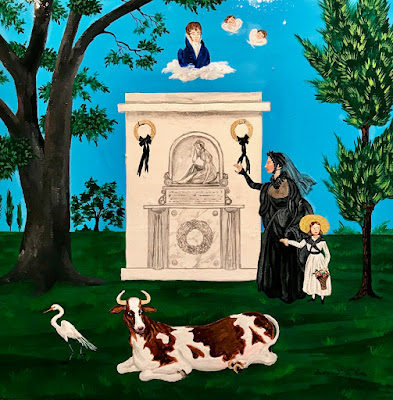 My latest masterpiece is titled “A visit to Creole New Orleans Cities of the Dead” 12 x 12 available. This painting depicts a real New Orleans Neoclassical tomb located in St. Louis Cemetery number 2. The cemetery was consecrated for burial in 1823. This interesting and unusual decorative tomb dates from the 1820's. The same time period for my painting, showing a widow and her child in mourning visiting her family tomb. Her recently departed husband is depicted above the tomb floating in clouds with angels. The tomb is a New Orleans above ground tomb made out of stuccoed brick with carved marble detail front. The ceramic wreaths hanging on both sides of the upper tomb is a immortelle.

An immortelle is an long-lasting flower arrangement placed on graves in cemeteries. They were originally made from natural dried flowers (which lasted longer than fresh flowers) or could be made from artificial materials such as china and painted plaster of paris or beads strung on wire arrangements. A cow lays in front of the tomb. It was hard to keep animals out of New Orleans cemetery's in the 19th century. New Orleans has always respected its dead, but this isn't the reason that our departed loved ones are interred above ground. Early settlers in the area struggled with different methods to bury the dead. Burial plots are shallow in New Orleans because the water table is very high.

Dig a few feet down, and the grave becomes soggy, filling with water. The casket will literally float. You just can't keep a good person down! The early settlers tried placing stones in and on top of coffins to weigh them down and keep them underground. Unfortunately, after a rainstorm, the rising water table would literally pop the airtight coffins out of the ground. To this day, unpredictable flooding still lifts the occasional coffin out of the ground in areas above the water table, generally considered safe from flooding.

Another method was to bore holes in the coffins. This method also proved to be unsuitable. Eventually, New Orleans' graves were kept above ground, following the French & Spanish custom of using vaults. The walls of some cemeteries here are made of economical vaults stacked on top of one another, while wealthier families could afford the larger, ornate tombs with crypts. Many family tombs look like miniature houses, complete with iron fences. The rows of tombs resemble streets--and this is why New Orleans burial plots quickly became known as cities of the dead.