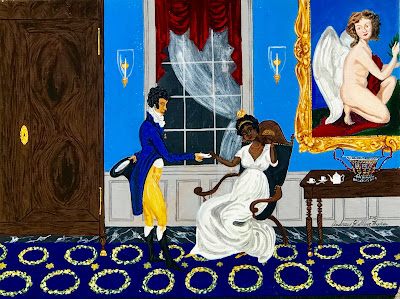 My latest masterpiece is titled "A Receipt for Creole Courtship" 12 x 9, Available. It depicts two New Orleans Creole free people of color in a early 19th century Creole Federal interior, the home of the free woman of color. A free man of color hands a free woman of color a receipt for courtship. The setting is a parlor in a Creole cottage in the French Quarter that is elegantly furnished with the latest fashion of Creole/French furniture and decorative arts! A quarter of the houses along the main streets of Creole New Orleans were owned by free blacks, many of whom were single women.

Creole cottages are mostly modest homes on the exterior. Creole's did not show off with the architecture of homes, like the Americans that were flooding the area. But Creole interiors were elegantly furnished like this room. During the antebellum period, Louisiana's free people of color enjoyed a relatively high level of acceptance and prosperity, a legacy of the state's French and Spanish founders. The Free woman of color is seated on a Louisiana Creole Campeachy chair and dressed in a white linen flowing dress in the classical Greek fashion made popular in the early 19th century.

She wears a Parure (matching set of jewelry comprising a diadem, a necklace, two earrings and bracelets ) made of coral and gold. In the 18th-19th century people thought that coral was a powerful protector against both sorcery and the Evil Eye, this substance also wards off nightmares. Coral is to be rubbed against a baby’s gums to aid with teething and hung around the necks of older children to keep them safe from witchcraft.

Red coral is especially beneficial, offering protection to ships and houses against storms. This shade will also turn pale if its wearer’s health takes a turn for the worse but will return to its original hue as the patient recovers. The furnishings and decorative arts in the room is a mix of Creole and French. To the left of the painting is a mahogany Creole armoire in the Federal manner dating from the early 19th century. It has inverted reeded baluster legs ending in brass paw feet. The free woman is seated in a Louisiana Creole Campeachy arm chair.

Campeachy chairs originated in the Mexican port city of Campeche. This style of chair was made locally in Creole Louisiana in the 18th and early 19th century. To the right of the chair is a Creole Federal style serving table with brass ball feet. On the serving table is a Empire Old Paris porcelain coffee pot and two coffee cans and saucers with coin silver spoon. Next to the porcelain is a ornate French painted tole basket. Over the serving table is a copy of "The Prince Henryk Lubomirski as Love of Glory" by French female artist Élisabeth Louise Vigée Le Brun painter to French Queen Marie Antoinette.

At age six, Henryk Lubomirski (1777–1850) was abducted by a wealthy but distant relative, who, regretting her lack of a male heir, reared him as her own. Vigée Le Brun presents the handsome boy in the pose of a famous Crouching Venus of antiquity, as interpreted by the French sculptor Antoine Coysevox. Creoles loved copies of Old Master paintings. On the side of the Federal drapery treatment are a pair of Federal Style Sheild Back Brass Candle Wall Sconces for light. On the floor is a Neoclassical wall to wall carpeting with laurel leaf wreath and star motif.