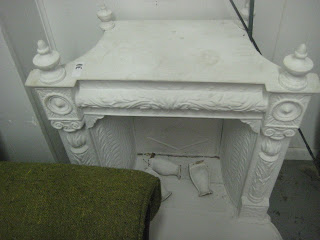 American Classical Empire style Franklin stove
You never know what you will find when you go to a estate sale. I did not know I would happen upon a 1820's-30's American cast-iron Franklin stove today. This is one of those items I have always wanted on a very long list of things I want. The stove was located in a obscure area of the estate sale in a corner with stuff all around it. After looking over the recently freshly painted white stove for a few moments I thought I would get it as the asking price was $65. dollars. I thought it was a nice reproduction one that go for $500-1,000 price range. The stove was worth a lot more then the asking price in scrap metal. After I bought it at a reduced price of $50. dollars the dealer told me it was a period one that came out of a Greek Revival home in New York city. After the dealer told me this I examine the stove closely and came to the conclusion it was a period stove made during the first 30's years of the 19th century. It was my lucky day as this was my Horoscope this morning.


Your eye for beauty -- and a good deal -- is heightened considerably right now, so get out there and look for new stuff for your home. Adding to or completing collections of all kinds is quite favored.

After doing some quick research on the stove, stoves similar to my stove were priced in the $1,500-$3,500 price range. I bought a few other items not worth talking about other then some circa 1800 very heavy coin silver dinner forks in the fiddle pattern priced at a dollar each.

Here is some info on Franklin stoves. By the mid 18th century wood began to be less plentiful and more expensive in the region of Philadelphia as it became one of the largest city's in colony. , and this led to the invention of the Philadelphia fireplace to economize fuel. This was improved by Benjamin Franklin, and Franklin stoves began to be made about 1745. Franklin had made a study of fireplaces, chimneys, and draughts, among his many other scientific investigations, and his own account of his invention is interesting. In his autobiography he writes as follows:

"Having, in 1742, invented an open stove for the better warming of rooms, and at the same time saving fuel, as the fresh air admitted was warmed in entering, I made a present of the model to Mr. Robert Grace, one of my early friends, who, having an iron-furnace, found the casting of the plates for these stoves a profitable thing, as they were growing in demand. . . . The use of these fireplaces in very many houses, both here in Pennsylvania and the neighboring states, has been, and is, a great saving of wood to the inhabitants."

The Franklin stoves were built of cast iron, to be fitted into the fireplace, or to extend out into the room, with a flue connection. Some were very simple in arrangement, while others had more or less elaborate systems of draughts. The old fireplaces were not always smokeless, and the new stove was an improvement in that respect.

Sea coal was advertised in Philadelphia as early as 1744, and Franklin stoves were soon made with grates as well as with flat hearths for andirons. Franklin never patented any of his designs and inventions so other people got rich off of his inventions.

The designs were often good, the jambs curving gracefully and the proportions pleasing. They were decorated with embossed patterns in the iron and with brass or nickel knobs and sometimes rosettes and rails. They were made with and without feet. Franklin stoves provided more heat and less smoke than an ordinary open fireplace and could be placed into just about any existing fireplace. Because they are made of cast-iron it would heat up and radiate heat into the room. He believed “that as we enjoy great advantages from the inventions of others, we should be glad of an opportunity to serve others by any invention of ours, and this we should do freely and generously”.

My Franklin stove dates from the 1820's of 30's and is decorated very much like American Classical furniture of the early 19th century such as sideboards or chest of drawers. The front pillars are similar to carved bedposts of the period with tobacco and acanthus leaf design column terminating in a graceful Ionic capital. The post sit on square acanthus rosettes and are topped with Bulls eye in a square panel acanthus block. The back plate and sides also have raised designs, A fern pattern and Navette shape. With finials on top. My stove might also have brass fittings on the stove under the white paint. Can't wait to get into this project. If the stove does not have brass detail. I will painted it black with gold leaf detail. I have a book of 19th century French 22 caret gold leaf I found in the attic of a 18th century French home in the South of France. The Classical design of the stove will fit well with my collection of Federal and Empire furniture. 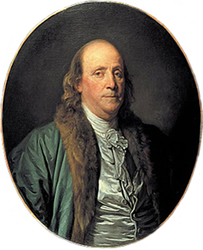 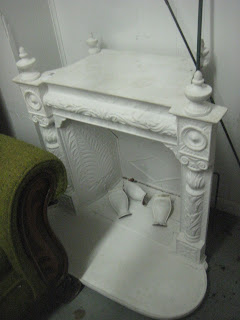 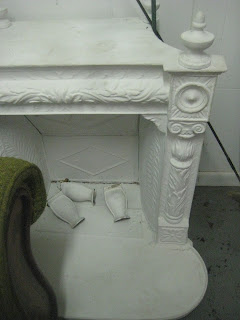 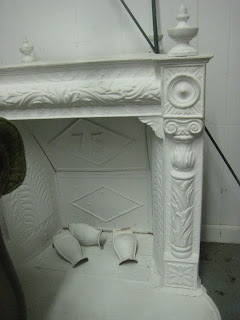 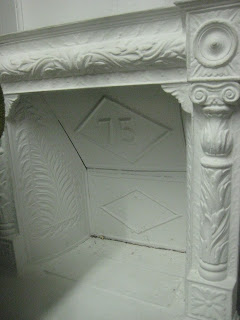 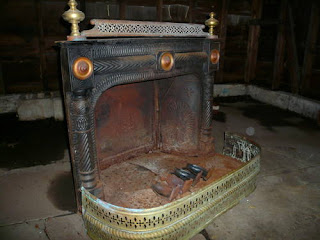 Other Franklin Classical stoves from the time period of my stove 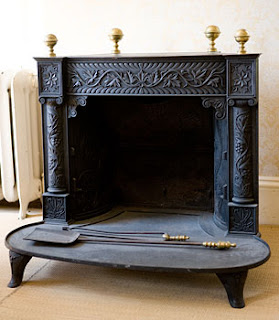 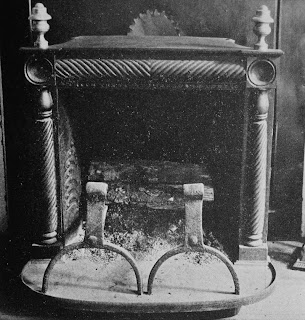 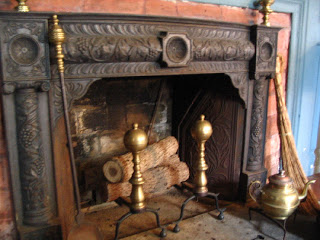 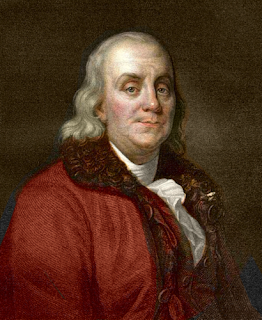 Ben said it best "The best is the cheapest." and "A house is not a home unless it contains food and fire for the mind as well as the body" Quotes by Benjamin Franklin
Posted by andrew1860 at 12:26 PM