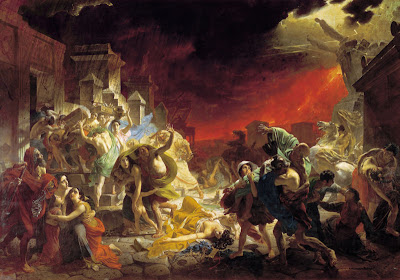 The Last Day of Pompeii 1830-1833 by Karl Brulloff (Briullov).
The State Russian Museum, St. Petersburg, Russia.
Karl Pavlovich Brulloff (also rendered Briullov, although he himself used the "Bruloff" spelling) was a Russian painter of the first half of the 19th Century, one of the transitional artists between the schools of neoclassicism and romanticism and the first Russian painter to gain widespread recognition in the West.


In 1821, Brulloff graduated from the Academy with distinguish.

In 1822, Karl, along with his brother Alexander, was sent to Europe to study art there, as pensioners of the newly-created Society for the Promotion of Artists.

In total, Brulloff spent a total of 13 years in Italy, studying the art of antiquity, copying the works of old masters in the museums and making a lot of drawings in the streets of Rome. One of the requirements of the Society for the Promotion of Artists for its pensioners was to paint a large historical picture. 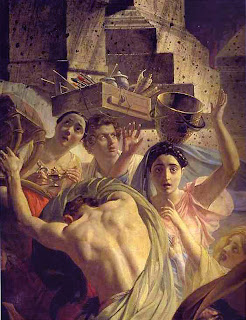 In 1827, Brulloff visited the excavation site of Pompeii, a town destroyed and buried under a layer of ash during an eruption of the volcano Vesuvius on August 24, 79 A.D. Brulloff was greatly impressed when he saw the town, perfectly preserved under the ash. The cataclysm had been so sudden, that life had simply stopped, as if frozen in time. Six years would pass between the conception of the idea and its materialization. After the first sketches had been done, Brulloff began studying the artifacts found in the excavations and historical documents, such as the letters of Pliny the Younger, who was an eye-witness of the event.

It is believed that the young man persuading his mother to come with him in the right part of the picture is Pliny himself.

We can see Yulia Samoilova face in The Last Day of Pompeii as the mother with two daughters, as the dead woman in the center of the picture and several others. Countess Yulia Samoilova was a rich heiress and Brulloff's mistress 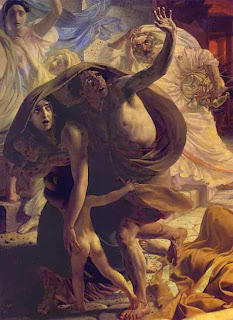 If one looks in the upper left corner of the painting, under the steeple one can see a self portrait of the artist. He is a beaming visanage peering at the art about to collapse. He is one of the several focuses in the picture, but not easy to identify.

The topic is classical, but Briullov's dramatic treatment and generous use of chiaroscuro render it farther advanced from the neoclassical style. In fact, The Last Day of Pompeii exemplifies many of the characteristics of romanticism as it manifests itself in Russian art, including drama, realism tempered with idealism, increased interest in nature, and a zealous fondness for historical subjects.

The commissioner, Prince Anatole Demidov, donated it to Nicholas I of Russia who had it displayed at the Imperial Academy of Arts for the instruction of young painters. Upon the opening of the Russian Museum in 1895, the vast canvas was transferred there, so that a larger number of people could see it in person. 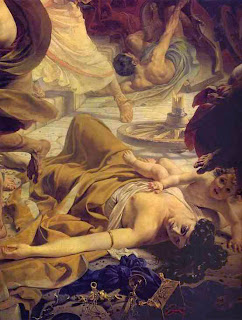 The Last Day of Pompeii was a huge success in Italy because of the way it blended Classical principles with Romantic ideals. It was also exhibited in the Louvre, Paris, but its reception there was lukewarm: in France, the transition stage between Classicism and Romanticism had been passed long since.

His contemporaries called him The Great Karl. His masterpiece The Last Day of Pompeii was a great success both with the public and the critics and the painter was hailed as one of the best contemporary European painters. Italian critics compared Brulloff to the greatest artists of the past, such as Rubens, Rembrandt, and Van Dyke. Characteristically, Sir W Scott declared that it wasn't an ordinary painting but an epic in colors.

When Brulloff returned to Russia in 1835, the Academy of Arts organized a reception in his honor, and he was even granted an audience with Tzar Nicholas I.

When the painting arrived in St.Petersburg, it impressed the public profoundly, and made Brulloff's reputation as the foremost Russian painter of his day. Critics lavished the The Last Day of Pompeii with praise. The first Russian artwork to cause such an interest abroad, it gave birth to a wonderful anthologic poem by Alexander Pushkin.

"You could hear women lamenting, children crying, men shouting. There were some so afraid of death that they prayed for death. Many raised their hands to the gods, and even more believed that there were no gods any longer and that this was one unending night for the world." — Pliny the Younger, circa A.D. 97 to 109

1 p.m.: When the people of Herculaneum saw a column of smoke bursting from Vesuvius, reaching nine miles into the sky, they looked around, astonished. As the first ash fell on the roofs of their houses, they understood it was time to run. Most stopped to gather what belongings they could: money, jewels, the family dog. Everybody rushed into the streets. Some thought the sea was their route to safety; those who didn't try to escape on boats assembled on the beach.

Midnight: The cloud reached almost 19 miles into the sky, and torrents of lava poured down Vesuvius. The beach probably offered a spectacular view of the eruption, but the fugitives didn't live much longer to admire it.

1 a.m.: A cloud of gas and ash plunged down on the town; the hot breath of Vesuvius killed the fugitives in a fraction of a second. By studying bone fractures and the position of the remains, anthropologist Paolo Petrone and volcanologist Giuseppe Mastrolorenzo established beyond a doubt that the fugitives were wrapped in a 900-degree Fahrenheit cloud. They died instantly of thermal shock, not from slow suffocation as scientists long assumed.

7 a.m.: A devastating surge killed the remaining inhabitants of Pompeii; they lay down with death on a thick carpet of pumice.

At the time Mount Vesuvius erupted, this was a wealthy Roman trading town, famous for its fish sauce and grand villas. Indeed, it was international and cosmopolitan.

In addition to Greeks and Etruscans, the population included residents from Africa. Of Pompeii's 20,000 inhabitants, half were children. The average Pompeian woman was 4 1/2 feet tall and lived to the age of 39. The average man was a few inches taller and could expect to live to the age of 41.

Pompeians poured their savings into their houses. Wealthy people enriched their homes with elegant courtyard gardens decorated with frescoes of plants and flowers and an abundance of modern conveniences. Each room was heated by hot air running through cavity walls and spaces under the floors, while sophisticated hydraulic pumps provided running water.

The entire city had an excellent system for the control and distribution of water. From a great reservoir, water flowed invisibly through underground pipelines into drainage systems and into aqueducts supported by arches. It reappeared in the city's houses, public buildings and fountains.
Posted by andrew1860 at 4:20 PM