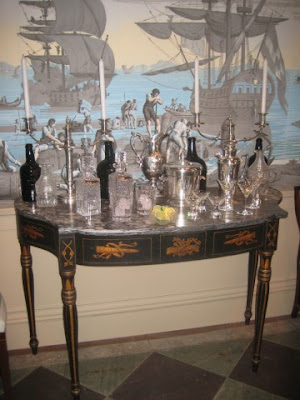 Early 19th century Baltimore fancy painted pier table set up as a bar
Winterthur, is the former country estate of Henry Francis du Pont (1880-1969). Today, Winterthur (pronounced "winter-tour") is the premier museum of American decorative arts, with an unparalleled collection of 85,000 objects made or used in America between about 1640 and 1860. The collection is displayed in the 175-room house, much as it was when the du Pont family lived here. Winterthur is also home to a masterfully designed naturalistic garden and a significant research library, all within 1,000 acres of rolling meadows and forest... an exceptional combination of beauty, history, and learning.

Although Henry Francis du Pont house was set up as a depository of American historic rooms. Henry lived and entertained in the rooms. Most of the rooms come from historic building that were being demolished thru out America at the time. This room with French hand blocked wallpaper from the early 19th century with scenes of the bay of Naples. The Federal period painted pier table was made in Baltimore, Maryland and has a King of Prussia marble top from Pennsylvania . On the table top Henry de Pont had a bar set up using Art Deco period crystal decanters and cocktail glasses along 19th century coin silver and early 19th century wine bottles. 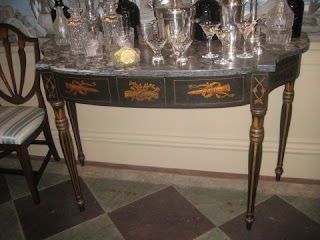 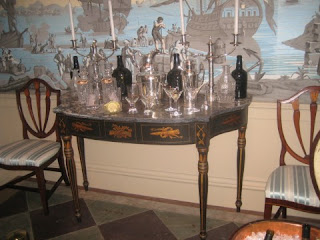 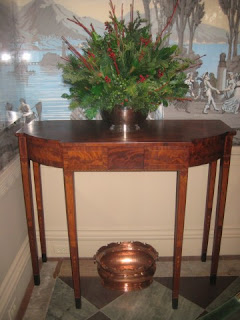