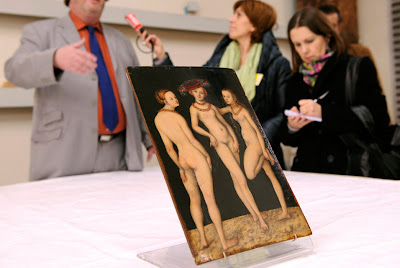 The 16th century oil on wood painting "The Three Graces", of three nudes by German artist Lucas Cranach is displayed during a news conference at the Louvre museum in Paris. The Louvre museum will acquire the "The Three Graces", painted in 1531 and measuring 24 cm by 27 cm and known as a masterpiece of the Renaissance, thanks to 5000 donors who replied to the appeal to help raise funds to buy it. REUTERS/Stringer.

On November 13, the Louvre museum launched a fundraising campaign to acquire The Three Graces by Lucas Cranach. This small oil on wood painting shows three female nudes painted with stunning sensuality and finesse. This masterpiece has been confined to private collections since it was painted in 1531. Astonishing in its technical perfection and because of its remarkable condition, The Three Graces has earned the status of a Trésor national, which entitles the Louvre to the right of first refusal for acquiring the work for its collection until the end of January 2011. Thanks to two corporate patrons (including Mazars) and the museum’s acquisitions budget, three-quarters of the funds were soon available. The Louvre then launched a broad appeal to gather the missing funds.

The campaign aimed at gathering, before January 31rst 2011, one million Euros, i-e the missing sum to complete the budget needed to acquire the painting. Thanks to the public’s generosity, the Louvre museum has reached this goal within a month after the campaign was launched: by Friday 17th December, one million Euros had been gathered. More than 5000 donors, mainly from France but also from other countries, have taken part in the campaign, with donations ranging from 1 to 40 000 Euros. Some small companies and Foundations have also contributed to the success of the campaign.

From March 2 to April 4 2011, the painting will be presented in a dedicated gallery within the Louvre. Donors at any level will have their name listed in the gallery where The Three Graces will be displayed for one month. - except those who wish to remain anonymous. The masterpiece will then become part of the Louvre's collection and join the galleries dedicated to the German Renaissance paintings.

For a Renaissance artist, painting the Three Graces first of all entailed broaching the notion of depicting female nudes. And Lucas Cranach’s take is brimming with virtuosity and a deeply original way of depicting the female form. He shows his ability to use his brush to draw the silky texture of the flesh, the elegance of the faces, and the graceful, flowing sensuality of the bodies. There is something disconcertingly erotic about these female nudes (Lucas Cranach was a master of this discipline, and indeed built his reputation on it). The Three Graces crowns this artist’s musings on other figures such as Eve or Venus. The landscapes that provide the backdrop for those compositions, however, have vanished and the plain dark background in their place brings out the intensity of the flesh and the objects in the painting.

Cranach worked on every detail in this painting with exquisite finesse: the eyes, the elegant noses, the position of the chignons, the pinkish cheeks and the delicate work on the hands...

Each of the Graces has its own distinctive movement, which affords each of them their own independence and sensuality. Their postures radiate extraordinary freedom, and are eminently modern: the one on the left is turning her back and clutching her thigh; the one on the right is facing sideways, standing on her right leg and holding her left ankle with her left hand; the third is the only one facing us, and wears an elegant hat. An extraordinarily ethereal and transparent haze intensifies the seductive aura and underlines the three young women’s nudity.

Cranach’s flair in creating a scene that is at once lively and harmonious is one of the reasons why this painting is considered one of his masterpieces.
Posted by andrew1860 at 8:05 AM