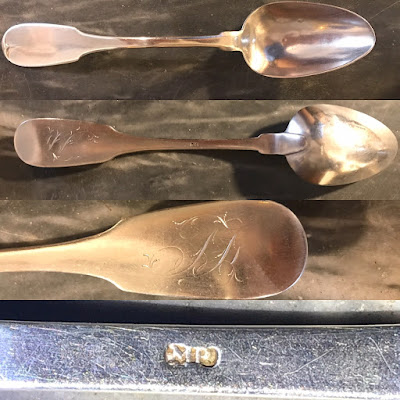 Today I bought a Fiddle pattern American Federal period coin silver table spoon in a French Quarter junk shop. When I fist saw the spoon I had hoped it might be a rare piece of New Orleans made Creole silver. After looking up the mark I found it was made by New York city silversmith Maltby Pelletreau (American b. 1791) of French Huguenot ancestry and still might have a New Orleans connection. The Pelletreau family originated from France and arrived in Massachusetts with twelve other Huguenot families in 1686. The family moved to Southampton, New York in 1728. Maltby Pelletreau's Grandfather Elias Pelletreau was the first silversmith in the family, working from 1750 - 1810 making gold jewelry, shoe buckles, tankards, silverware, etc. He became well-known as a silversmith in early America selling his wares to clients between Connecticut and New Jersey. He is considered a local hero for his role as Captain of the Suffolk County Militia and his financial backing of and participation in the American Revolution. His Grandson who made this spoon 🥄, Maltby Pelletreau was the third generation of this illustrious American silversmithing family. He worked in New York city from 1813 to 1840. Maltby Pelletreau, who had been in business in New York City since at least 1813, was engaged in a series of partnerships in Charleston South Carolina, and New Orleans where his New York city made silver was exported to the South. Researching antiques is just as exciting as finding them. This one ☝️ 200 year old spoon 🥄 found in a junk shop in New Orleans, made in New York City 🌃 by a person of French Huguenot Heritage is steeped full of American history is just more then a spoon 🥄. In a day where most people would rather have flatware 🍴 from IKEA 😳! Here @ Le Château de Hopkins we are sticking to the old stuff full of history and Beauty!