Two of my Paintings 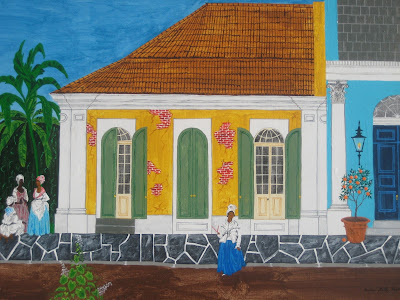 “Haiti” by Andrew LaMar Hopkins
Over the past month I sold two of my Folk Art painting out of the Gallery that represents me, The Kangal Gallery in Mobile, Alabama. The latest sell was a painting titled “Haiti” As a Historical Folk artist I look to the rich past of the Gulf Coast and closely related places to the Gulf like Haiti. Once a rich Caribbean Island. When owned by France in the 17th & 18th century’s Haiti was the richest colony in the world. 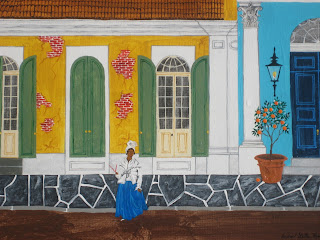 Haiti and the French Gulf Coast shared a culture, customs and architecture. In my painting of Haiti I show a early 19th century street scene. A age old stucco Creole Cottage with terracotta roof tiles covering a high pitched roof. The stucco aged with cracks and missing pieces exposing the red bricks of the original construction.


This house has three front doors (in the French Colonial architecture style) or 3 French doors across the front with heave batten shutters. The transom windows above the French doors have half circle Tromp l’oeil design. The end plasters are paneled as well as the footing under the French doors. The building is finished with a run plaster cornice molding at top of front wall. 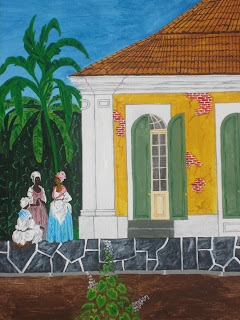 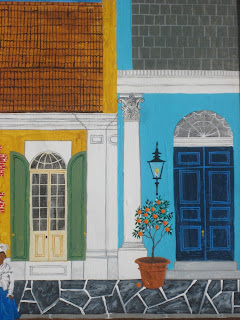 Detail of “Haiti” by Andrew LaMar Hopkins
The newer building next to the Creole cottage is built in the Greek Revival style influenced from America. It is also stucco with fancy Classical Corinthian column end. The building has granite steps, a Classical Dental molding cornice and imported slate roof. The opening has half circle transom with paneled shutters.


A iron gas light attached to the exterior wall would be the latest in lighting Technology for the early 19th century. The potted orange tree outside on the flagstone sidewalk symbolized wealth in the 18th and early 19th century. A Free Woman of color holding a fan crosses the street and three women talk to the side of the Creole cottage. 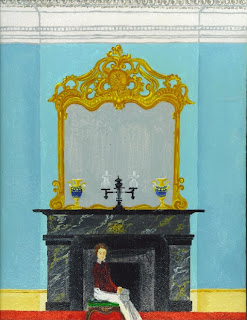 “Boy with a book” by Andrew LaMar Hopkins
My painting “Boy with a book” shows a American interior of a mid  19th century middle class home of about 1840. The focal point of this painting is a mantled wall of a Greek Revival Townhouse. The mantel made of the popular gold vain Egyptian black marble, trimmed in black slate.
The Classical plaster cornice molding with Dental details and egg & dart motif. Over the mantel is a ornate gold leafed Rococo Revival mirror. On the mantel are  pair of French Empire Royal blue and gold Old Paris porcelain urns. In the middle is a bronze and crystal argon lamp. The boy sits in front of the mantel with a open book. He is on a Rosewood Rococo Revival stool covered in green silk velvet.
Posted by andrew1860 at 12:00 PM