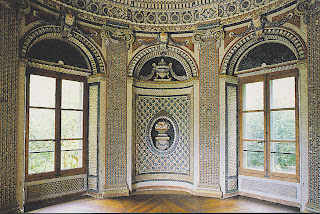 The first reveals to visitors pilasters, niches, arches and festoons of shells.
In the Fall of 2001 on my two week stay in France I decided to go to the French village of Rambouillet 30 miles outside of Paris, to see The Laiterie de la Reine, the Queen's Dairy. The night before my visit I called my best friend Don Richmond a retired interior decorator who had studied in France in the mid 1950's. He told me make sure you see the Shell Thatched Cottage. The what I said. The Shell Thatched Cottage buit for French Queen Marie Antoinette's close friend Maria Teresa Luisa of Savoy, Princess of Lamballe. Ok I said, I will try and see it. The next morning was cold, and by the time I reached the village of Rambuillet by train around lunch time, I was hungry. I stopped for a quick something to eat. Not knowing a a lot of French I could not make out much of what anything was on the menu. I told the waiter to bring me what everybody else seam to be enjoying at the restaurant, some kind of meat with potatoes. It was fabulous even though I did not know what I was eating. Until I got a piece that was shaped funny. I latter found out it was Coq au vin made of rooster in Burgundy wine sauce. 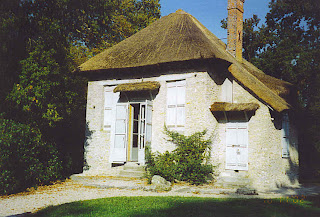 The out side of this building seems like a peasant's thatched cottage
After touring the Château de Rambouillet. There was a special tour of The Laiterie de la Reine, the Queen's Dairy and The Chaumière des coquillages close by. We went to the Queen's Dairy first I will blog about this latter. But the surprise was The Chaumière des coquillages or shell thatched cottage not knowing what to expect. the out side of this building seems like a peasant's thatched cottage but when the door was open before me was revealed a delightful fantasy shell grotto. It's walls inlaid with Neoclassical patterns of colored shells. Built 1779-1780 by one of the richest men in France the Duc de Penthievre for his recently widowed daughter-in-law, The Princess de Lamballe. The cottage sits in a Anglo-Chinois garden laid out by Artist Hubert Robert. The Princesse de Lamballe was fond of her hideaway, as well as Marie Antoinette who used the room to serve tea after 1783 when the château became the private property of king Louis XVI, who bought it from his cousin the duc de Penthièvre as an extension of his hunting grounds. In latter years Napoleon found it a ideal escape from the agitated life at the chateau. 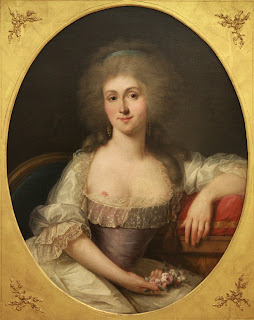 Maria Teresa Luisa of Savoy, Princess of Lamballe
Side chair by Toussaint-Francois Foliot decorated with shells and sculpted and painted with reed motifs 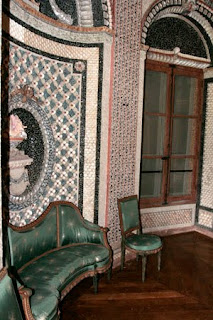 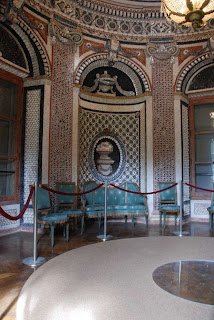 Furniture circa 1780 by Toussaint-Francois Foliot 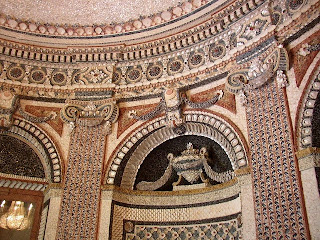 Detail of the pilasters: They are fluted with mussels and periwinklws. capped by Ionic capitals made of sea-ears and oysters. 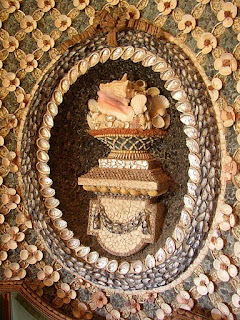 In the four niches are perfume burners made of sumptuous specimens, scallop shells and tritons they stand out against broken green glass.
Design by Claude-Martin Goupy, the architect of the duc de Penthièvre. A rotunda with walls completely covered with shells constitutes the inside of the cottage. The preciousness of the interior decoration is startling in comparison with the rustic exterior. The furniture four couches, eight chairs and a screen was made to order. The extravagance of their design adds to the general impression of bizarre originality. The furniture was ordered from wood-worker Toussaint-Francois Foliot {named master craftsman in 1773}. They are decorated with shells and sculpted and painted with reed motifs. The couches are shaped like medallions and are curved to fit the curved wall space. Sold to England during the Revolution the furniture was brought back to France in 1941 and is covered in a copy of it's original green silk lampis. A hidden room with walls painted in the Louis XVI Pompeian style is adjacent to the rotunda. In the golden age the rotunda came to life with the pastille burners in the niches burning pastille a solid aromatic substance that was burned like incense. Had two controllers but when the war of 1870 the 18th century pastille machinery was damaged. 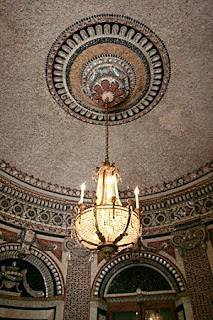 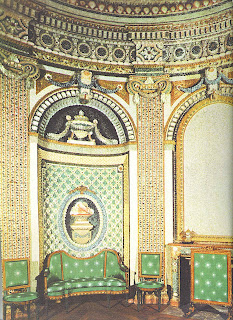 An arch of pearl covers this rotunda. The nacre is from Dieppe and Moile Nogent sur seine.
Posted by andrew1860 at 11:22 AM