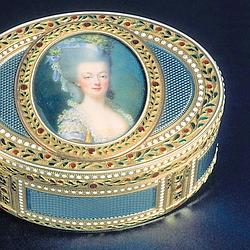 A 18th century gold and enameled box with a beautiful portrait of a Marie Antoinette
During the Ancien Régime in France French Queen Marie Antoinette appears to have had a taste for ornament derived from ancient Egyptian art a decade before Napoleon's North African campaign was to inspire the fashion known as égyptomanie, One reason I love Marie Antoinette so much is she was a person like myself that knew exactly what she wanted and liked. Everything that was made for her she picked out and approved every detail. Reflecting her love for beauty, nature, the exquisite, fine, rare and , she created her own style. She did it her way. Let's explore some of the French Queen's taste in the French/Egyptian style.
I have noticed in the last 24 hours my blog received over 10,000 views. My only conclusion for this might be my post called  "The French Egyptian Revival style retour d'Egypte" Exploring the French Egyptian style in France. This post and my Marie Antoinette Egyptian style post have been a few months in the making. I'm sure people are doing searches for Egypt due to the riots and protest by Egyptian demonstrators demanding the ouster of President Hosni Mubarak. Although my post are not about the protest or riots I hope people will stop by and learn about the French Egyptian style.  Thank you 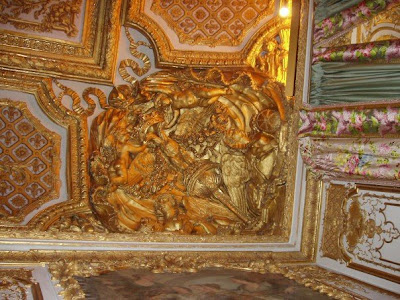 Marie Antoinette's ceiling in her bedroom at Versailles. Although parts of the ceiling dates from the late 17th century and mid 18th century Marie Antoinette had the beautiful gold leafed stucco corners placed in with the Hapsburg double headed eagle and winged Sphinx 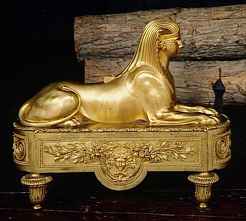 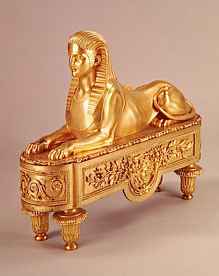 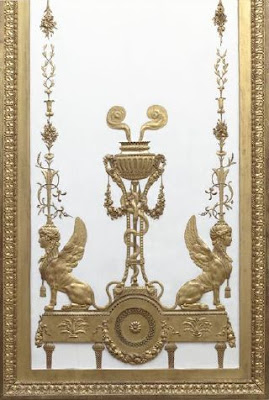 Winged Sphinx carved paneling in Marie Antoinette's Salon Doré at Versailles. The last major modification to the petit appartement de la reine occurred in 1783, when Marie-Antoinette ordered a complete redecoration of the grand cabinet intérieur. The costly white satin embroidered with floral arabesques hangings were replaced with caved gilt paneling by Richard Mique. The cost of the walled fabric was 100,000 livres; The new décor caused the room to be renamed the cabinet doré 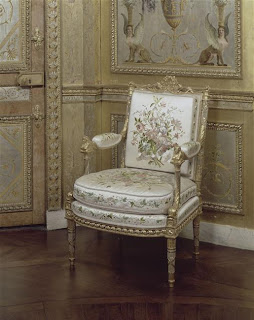 Marie Antoinette Arm chair by George Jacob in her boudoir in Fontainebleau. The arm of the chairs have carved Sphinx at the top also note the painted winged Sphinx above the chair painted by the Rousseau brothers 1786.
Chairmakers

Due to the high level of specialization and the strict regulations, both menuisiers and ébénistes had to work with members of other guilds, such as designers, carvers, gilders, upholsterers, and gilt-bronze mount makers, to complete their furniture. In order to make a chair, for instance, first a design or drawing was made by a draftsman or designer. For a special commission, a small model of wax or wood could be produced for the approval of the client before the menuisier would be able to start cutting the basic form of the chair. Working mostly in walnut or beech, the chairmaker was allowed to carve only simple moldings or floral decoration, leaving the more elaborate ornament to a sculptor. Although chairs could remain in natural wood when they were waxed or varnished by the menuisier, most were painted or gilded by specialized painter-gilders. Before the actual gilding, the so-called réparure was done to refresh some of the carved elements lost under the layers of preparatory gesso and to add additional details. Finally, an upholsterer would cover the seat furniture with leather, silk, velvet, or other materials and fine trimmings. Since only the menuisier was obliged to sign his work, the names of the other craftsmen are, unfortunately, rarely known. Both the gilding and the upholstery would add a substantial amount to the chair's total cost. It was also the tapissier-garnisseur (upholsterer) who was responsible for selling the completed chairs in his shop. 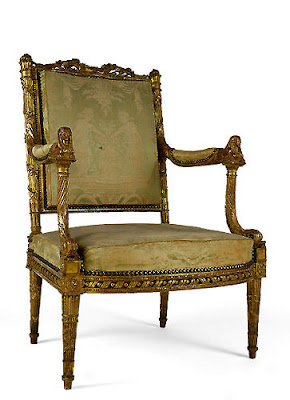 Marie Antoinette Arm chair by George Jacob in her boudoir in Fontainebleau. 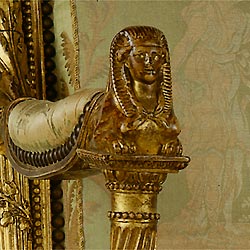 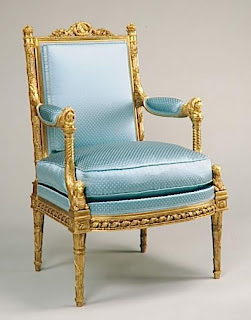 Marie Antoinette Arm chair by George Jacob in her Meridian at Versailles carved with one of her favorite dogs at the top of the arm and a Sphinx at the bottom ca. 1785. 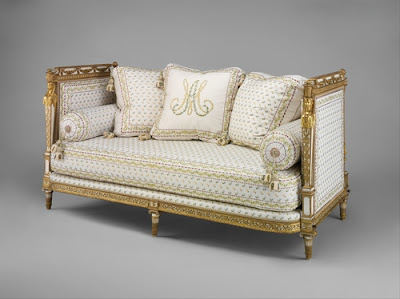 
was in need of renovation. The architect Richard Mique (1728-1794) enlarged and altered it, and appropriate furnishings were ordered for the queen's apartment.

Many pieces of furniture were commissioned from Jean-Baptiste-Claude Sene (1748-1803), a member of an important dynasty of Parisian chair makers who received a royal appointment in 1784. Sene provided a set of seat furniture for the queen's dressing room, called her cabinet particulier ox cabinet de toilette that is described in the 1789 inventory of Saint Cloud. The daybed, the bergère (a comfortable chair upholstered between the arms and the seat), and the fire screen from the set are now in the Met's Museum's collections. The painted and gilt frame of the low daybed is embellished with floral motifs. Six short tapering and fluted legs surmounted by Ionic capitals support the piece. The front stiles of the head- and footboard, which are of equal height, are carved with female half-figures wearing Egyptian headdresses. The berg?re which has a medallion with Marie Antoinette's initials on its top rail, is decorated in a similar manner. A decade before Napoleon's North African campaign was to inspire the fashion known as égyptomanie, the queen appears to have had a taste for ornament derived from ancient Egyptian art. Seated classical female figures, rather than Egyptian caryatids, decorate the feet of the fire screen , and a woman who once held a cornucopia reclines on its top. The carver is not known, but Louis-François Chatard (ca. 1749-1819) was responsible for painting and gilding the frames.

cotton with rows of individual flowers embroidered by the queen herself. When the three pieces came to the Museum in 1941 only the fire screen's show cover

had survived. Although the cotton ground is much discolored, Marie Antoinette's

interlaced initials, composed of blossoms embroidered in satin stitch, are in remark 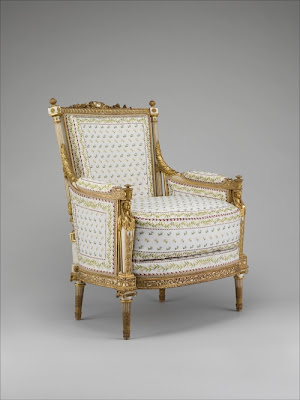 This armchair is part of a set that consisted of a daybed, four armchairs, a bergère, a footstool, and a fire screen made for Marie Antoinette's cabinet de toilette (dressing room) at the Château of Saint Cloud in 1788. This set was originally upholstered with material that was embroidered by the queen herself. The frame of the bergère is finely carved with acanthus and ivy leaves, rosettes, and—on the arm supports—Egyptian term figures. The back rail is crowned by a cartouche with the initials of Marie Antoinette. 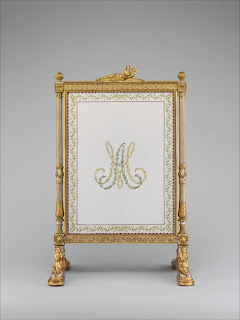 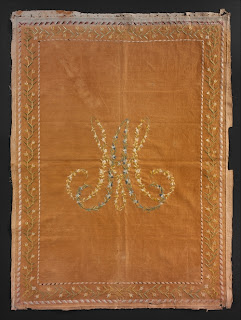 Firescreen panel, Panel Embroidered by
Marie Antoinette, Queen of France 1788
According to the 1789 inventory the set was originally upholstered in a white-twilled
cotton with rows of individual flowers embroidered by the queen herself. When the three pieces came to the Museum in 1941 only the fire screen's show cover had survived. Although the cotton ground is much discolored, Marie Antoinette's interlaced initials, composed of blossoms embroidered in satin stitch, are in remarkably good condition. 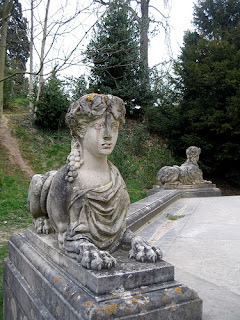 The Marie Antoinette's Belvedere is surrounded by numerous carved stone Sphinx each with different faces
Posted by andrew1860 at 4:27 PM