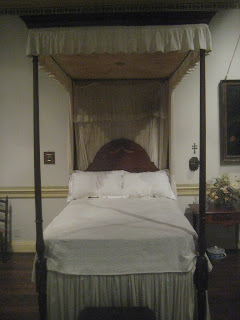 Highpost Bedstead Federal period made in New Orleans of walnut, circa 1810-1820. The bed has a melon-shaped headboard which is a unique feature in early Louisiana beds. The headboard has graceful swag and tassel inlay.

I have been asked recently how were home furnished and what did period interiors look like in 19th century New Orleans and Louisiana homes. The New Orleans Museum of art has two wonderful period rooms of the early 19th century. A creole bedchamber and a New Orleans Anglo-American drawing room. I was in New Orleans recently for a week celebrating my birthday the first week of Aug. The New Orleans Museum of art is free on Wednesdays and while there I rediscovered theses lovely period rooms. The lighting is low to create a early 19th century atmosphere and the museum has a no flash policy so the photo's are not the best but you can still get a ideal of what a well-to-do home looked like in Louisiana 200 years ago.

This bedroom gives the viewer some ideal of how a room of this type might have been furnished and looked like in a elegant New Orleans Creole towntouse or plantation home during the early part of the 19th century. The room displays a fine pieces of Louisiana made furniture like the inlaid bed and armoire as well as more simpler pieces of furniture like the tilt-top breakfast table and Acadian hope chest. 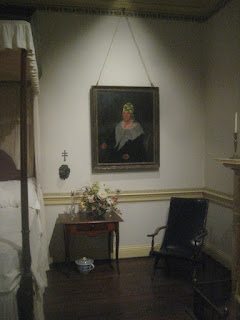 A Louis XV side table made around New Orleans is made of cherry and cypress as secondary wood, circa 1770-1810. This type of delicate one drawer table are very rare. They were used originally as tea table, dressing tables and side tables. Under the table is a slipware chamber pot made in England known as Mocha  ware, circa 1825-1830. The char to the right is called a Campeachy chair made in Louisiana circa 1820-1830. It is a variation of a lolling chair. This style of chair originated in Campeche State in the Yucatan of Mexico. Over the Louis XV table is a portrait of a free woman of color oil on canvas painted by French artist Antoine Callas circa 1822-1825. Louisiana had the largest population of free lacks citizens of any state in the South during the time of slavery. 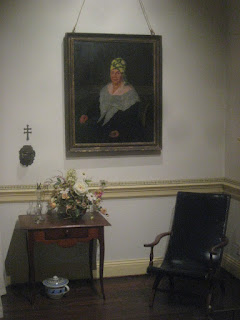 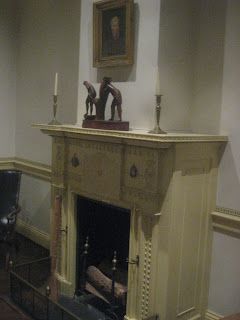 The mantel was made in Philadelphia and dates to the Federal period. Sides were added to the mantel to make it resemble the wrap-a-round ox mantels of New Orleans. On the mantel is a carving by Pierre-Joseph  Landry of "A self portrait of the artist observing an Indian Maiden at her bath" . carved out of Magnolia, circa 1825. Landry a Frenchman became a planter in Iberville Parish and tuck up sculpture after developing tuberculosis in a knee around 1820. He did not complete many works but they are unique to early Louisiana Folk art. 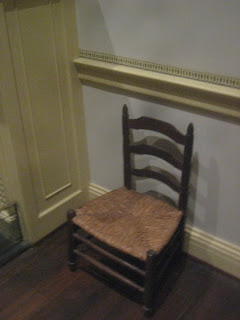 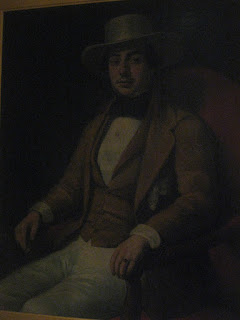 Portrait of a Planter by Jacques-Guillaume-Lucian Amans, circa 1835-1845. Amans was the leading portrait painter in New Orleans during the 1840's and worked in the Neoclassical style and was greatly influenced by  French artist Jean-Augusts-Dominique Inges
` 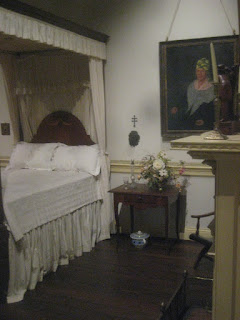 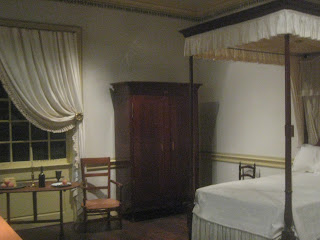 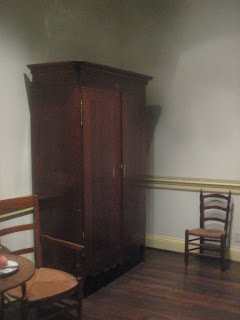 Louisiana Armoire in the Louis XV style made in New Orleans is made of Mahogany, walnut with light and dark inlay with cypress as secondary wood, circa 1800-1815. The overall design of this armoire is 18th century French Louis XV style. The inlay and brass drawer pulls are influenced by the Anglo-American influx  into New Orleans and Louisiana in the early 19th century. The monogram of the original owner at the top of the armoire is a fine example of the lending of French Creole and Anglo-American styles incorporated into one piece. 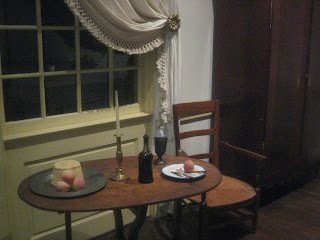 Oval tilt-top table in the Neoclassical style made in New Orleans of poplar, circa 1800-1820. This table original belonged to the Puig family of New Orleans. This type of table known from Spain to Scandinavia but is rare in America. This Louisiana made example is supported by a revolving neoclassical lyriform brace. The Directoire style armchair was made in New Orleans and is made of cherry. This type of Louisiana made chair is designed to receive a  a seat cushion and back cushion. 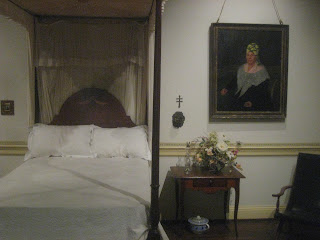 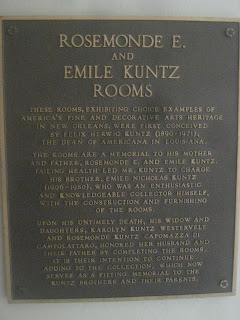 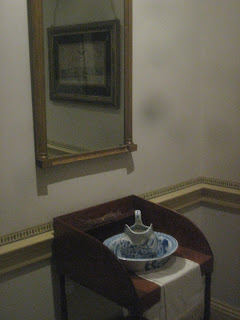 Washstand of the Sheraton style made in New England of birch, circa 1805-1820. The bowl and pitcher are 18th century Staffordshire and the linen towel dates before 1860. The Sheraton style looking glass is American and might be made in Boston. circa 1800-1810 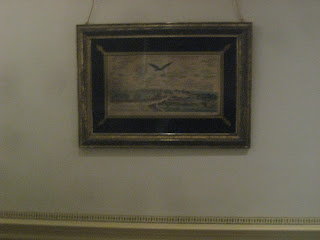 A view of New Orleans taken from the plantation Marigny a Acquaint dated November 1803 by J.L. Boqueta de Woiseri 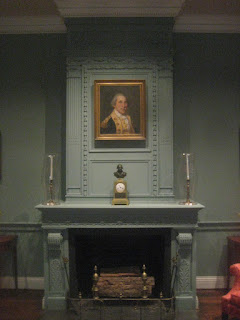 One of the finest Neoclassical Louis XVI styled carved and painted cypress New Orleans made mantel and overmantel circa 1795 removed from the Bosque House in the French Quarter.

This period room at the New Orleans Museum of Art represents how a early 19th century parlor might be furnished by the arriving Americans flooding into the Louisiana territory after the Louisiana purchase in 1803. Anglo-American settlers mostly came from the American East Coast and brought with them furnishings and decorative arts to the Franco-Spanish city of New Orleans.  They brought older styles like the Chippendale as well as newer pieces in the Hepplewhite and Sheraton tastes. The furnishings in the room represent the kind of things a well off New Orleans family of East Coast origin might have in Creole New Orleans.

The drawing room centers around a Neoclassical Louis XVI styled carved and painted cypress New Orleans made mantel and overmantel circa 1795 removed from the Bosque House in the French Quarter. 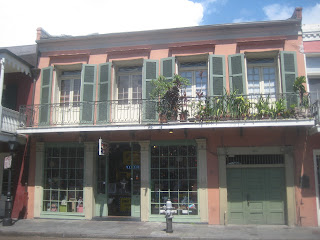 The Bosque House, at 617 Chartres Street,was built in 1795 by Bartholome Bosque, a native of Palma, Majorca, and father of Suzette Bosque, third wife of Lousiana's first American Governor, W.C.C. Claiborne. The site previously held the house of Bernardo de Gálvez, the Spanish Governor of Louisiana.
The Creole townhouse features an Arabesque monogram on the balcony, represents the style of Spanish Colonial ironworking in New Orleans. One accesses the rear by a porte-cochere or carriageway, and ascends the stairs in the rear of the building. 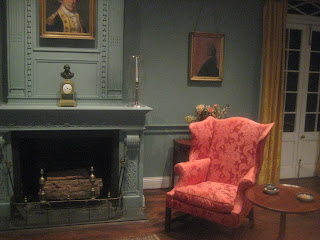 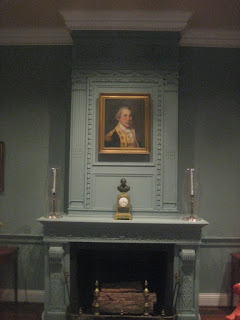 The portrait over the mantel is of General George Washington oil on canvas circa 1779 attributed to Charles Willson Peale. The mantel clock is French first Empire made by Isidore Grenat of Paris, France. Made of patinated bronze and gold gilt ormolu and dates to 1805-1810. This type of clock was made for the American market and features a buest of George Washington and a brass relief of Cornwallis surrender at the Battle of Yorktown. It carries the legend, " First in War, First in Peace/and First in the hearts of his Countrymen" The pair if candlesticks are George lll English blass circa 1780. 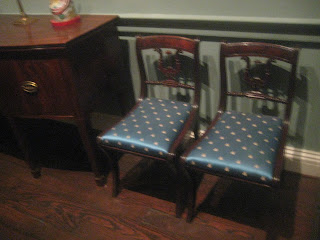 A set of 4 chairs in the late Federal style made in New York city. made of mahogany and date from 1815. Original part of the Catholic Bishop of New Orleans residential furnishings. The backs with there eagle-head lyre splats. The chairs are attributed to the workshop of Parisian trained New York cabinetmaker Charles-Honore Lannuier, who was active in New York from 1803 until his death in 1819. 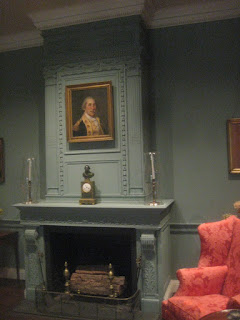 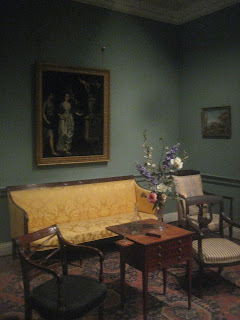 The portrait over the sofa is by James Claypoole, Jr and is a Allegorical Memorial portrait of E.R. oil on canvas and dated 1774. Claypoole was born and trained in Philadelphia and moved to Kingston Jamaica around 1771, where this work was painted.  The sofa is Sheraton style made in New York city circa 1805. The style of this sofa relates to designs of Duncan Phyfe, but is signed by Alexander Anderson a contemporary of Phyfe's. 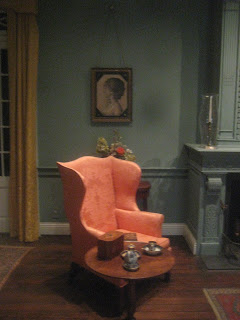 On the wall a portrait of Mrs. David Mead Randolph by Charles Fevret de Saint Memin. Pastel on pink paper in it's original verre eglomise mat and gilt frame, circa 1804. Mary Randolph was a cousin of President Thomas Jefferson. 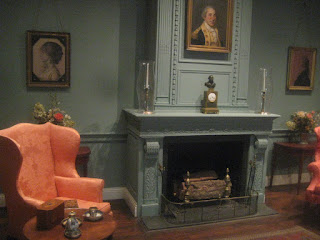 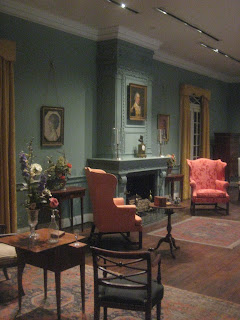 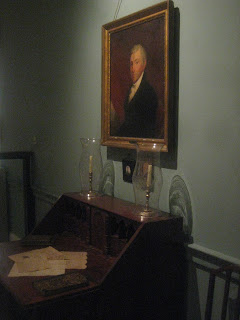 Slop-fall-front-desk in the Chippendale style made in Lancaster Pennsylvania, made of cherry and poplar circa 1760-1785. Portrait of President James Monroe by Jane Stuart after Gilbert Stuart. oil on canvas circa 1835. Jane Stuart was the daughter of celebrated American painter Gilbert Stuart.