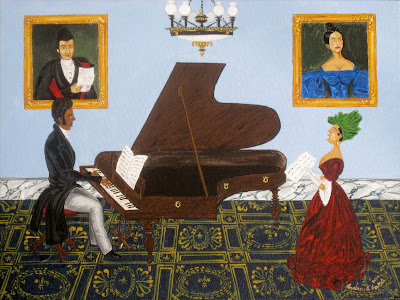 My latest masterpiece is titled "Edmond Dédé in Creole New Orleans" sold 30 min after it was finish today! Edmond Dédé was a New Orleans Creole born (November 20, 1827, New Orleans, Louisiana – January 4, 1901, Paris, France) was a free-born Creole musician and composer. He moved to Europe to study in Paris in 1857 and settled in France. His compositions include Quasimodo Symphony, Le Palmier Overture, Le Serment de L'Arabe and Patriotisme. He served for 27 years as the conductor of the orchestra at the Théâtre l'Alcazar in Bordeaux. A French city that had a large population of Creoles of color. My painting shows Dédé as a young man in New Orleans before moving to France. He is playing a French grand piano in a elegant room furnished with wall to wall carpeting. Marbleized baseboard to look like "King of Prussia" and light blue painted walls.

Dédé is accompanied by a Creole Free woman of color singing. On the wall is a pair of classical portraits of Free people of color in gold leaf frames.And a English Regency cut-glass, gilt metal and bronze oil chandelier.  Dédé's parents had arrived in New Orleans, Louisiana, from the French West Indies around 1809, after the Haitian Revolution. His father was a militia unit bandmaster. As a boy, Dédé first learned the clarinet, but soon switched to the violin, on which he was considered a prodigy. He would later go on to perform compositions of his own as well as those by Rodolphe Kreutzer, a favored composer of his. Dédé's teachers in his youth included violinists Constantin Debergue and Italian-born Ludovico Gabici, who was the director of the St. Charles Theater Orchestra. He was taught music theory by Eugène Prévost and New York-born black musician Charles-Richard Lambert, the father of Sidney and Charles Lucien Lambert.

He worked as a cigar maker, saving money to be able to travel to Europe. He went first to Belgium, then Paris, where he managed to obtain an ultimately successful audition at the Paris Conservatoire in 1857. He studied at the Conservatoire with Jean Delphin Alard and Fromental Halevy. In 1864 Dédé married a Frenchwoman, Sylvie Leflet, and settled in Bordeaux. They had one son, Eugene Arcade Dédé, who became a classical music composer as well. Edmond Dédé served for 27 years as the conductor of the orchestra at the Théâtre l'Alcazar in Bordeaux. He also conducted light music performances at the Folies Bordelaises.

Samuel Snaer, Jr. (1835–1900), an African-American conductor and musician, conducted the first performance in New Orleans of Dédé's Quasimodo Symphony. It was premiered on the night of May 10, 1865, in the New Orleans Theater to a large audience of prominent free people of color of New Orleans and Northern whites. Dédé was not present at this performance.

After settling in Bordeaux in 1864, he returned to New Orleans only once, in 1893, to give a performance. During his journey to the United States, he lost his precious Cremona violin. Forced to use a different instrument, he still performed to accolades.

Dédé died in 1903 in Paris. Many of his compositions have been preserved at the Bibliothèque Nationale de France in Paris. SOLD 12 x 9   https://squareup.com/store/andrew-hopkins/item/edmond-dede-in-creole-new-orleans-x 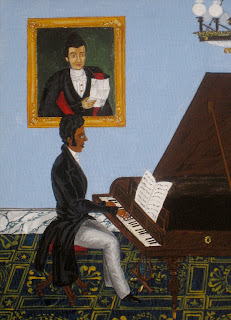 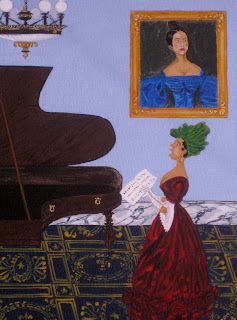 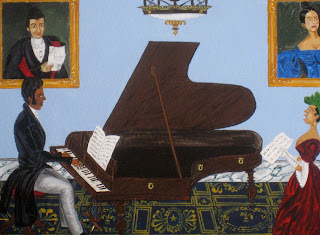 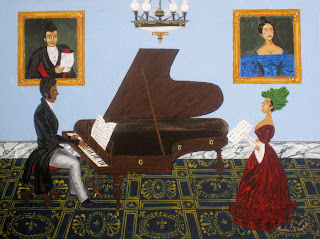